The Daily Texan ran an article written by Noah Levine about me getting banned from the Austin Revolution Film Festival after I asked, “Do you have any laurels that don’t have guns on them?”

Published on September 30, 2018 at 11:37 pm
BY NOAH LEVINE
Every film student looks forward to the day a festival recognizes their work. For UT radio-television-film alumnus Scott Cobb, this dream became a reality, and then quickly became a nightmare.

In June 2018, Cobb’s script entitled “Overwood” was selected as a semi-finalist by the Austin Revolution Film Festival. While Cobb was honored by the award, there was one glaring problem with the festival’s imagery — its focus on guns. The repercussions of his story have struck a chord with current radio-television-film students who one day hope to embrace Austin’s robust selection of film festivals.

Included in the festival’s email were laurels meant to showcase the achievement of the writers, but instead, Cobb said he felt they glorified gun culture.

Not wanting to associate his project with such violent images, Cobb said he asked the festival via email if they offered alternate laurels that did not feature weaponry. They responded, telling Cobb he was welcome to create alternate laurels.

In an email to festival representatives, Scott agreed to consider designing his own laurels but explained his criticism, stating that the laurels were insensitive and out of touch with the modern political climate. As a result, the ARFF revoked Scott’s award, stripping the script of its semi-finalist position.

Cobb said his wariness of gun-related imagery comes from his story as a survivor of armed robbery at a McDonald’s in Houston in the 1990s.

“Two people came in, showed us their guns, hit me in the face with the butt of one, and ordered us into the kitchen,” Cobb said. “I was told to lie down and a long gun was stuck hard in my back.”

Cobb compares his treatment by the festival to mid-1900s Hollywood, when unfair rules and blacklists banned filmmakers with controversial or outspoken opinions from participating in the industry.

Founder and editor of “MovieMaker Magazine” fsTimothy Rhys said it is unfortunate the parties involved were unable to work through the issue respectfully.

“I can appreciate the festival’s unwillingness to change its imagery or allow any usage of alternate imagery,” Rhys said. “I can understand Scott’s point, as well, and don’t think he should have been disinvited.”

The festival is also a part of the Film Festival Alliance, which prides itself in strengthening “the film festival industry and advocates for a sustainable and inclusive environment for film festivals and the people who run them,” according to its website.

Despite sparking conflict by speaking up, Cobb is trying to find his way in the film industry by continuing to share his work with festivals. Cobb said he believes unjustifiable retractions of recognition due to an artist’s personal or political views represents a major roadblock in the way of aspiring artists like himself.

“(A film festival) harms the entire filmmaking community by silencing people at a time in history when filmmakers should be encouraged to speak out and not feel intimidated into remaining silent,” Cobb said. 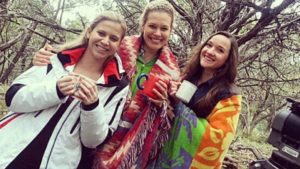 Congrats to all the 2018 Hill Country Film Festival Winners!

The script for “Overwood”, written by Scott Cobb, Morgan Floyd, Angelina Castillo and Ali Meier is accepted to the Hill Country Film Festival as a 2018 Short Screenplay Finalist. The festival takes place in Fredericksburg, Texas April 26-29, 2018.

Overwood is a short film about a woman who returns to her childhood home for the first time after ten years abroad to find it sitting empty with the furniture covered in sheets. Her two sisters discover her in the house and confront her about her long absence from their lives.

Overwood is the name of the house that the sisters gave their home as children after watching the 1939 film Wuthering Heights because they liked the idea of homes having names.